This tongue twister is a doosey, and I started wondering tonight if it is trying to teach alliteration, math, or something about food science.

As far as alliteration goes, this tongue twister gets an A+. There are lots of palpable P’s.

As far as math goes, it isn’t quite a brain buster. How many pickled peppers did Peter Piper pick? Well, according to the rhyme, he picked a PECK. Easy. I guess…unless you count the fact that a peck isn’t actually a number of items, then I guess the math problem gets a bit more complicated.

Or maybe the math problem is way trickier than originally thought…now that I have worked through the problem, my final answer is ZERO. Zero pecks. No pecks. Zippo.

Why? Because supposedly he picked pickled peppers. After this evening, I am pretty sure pickled peppers do not grow on trees (or bushes? I’m not a horticulture expert. Give me a break.). I am a math genius! And this tongue twister is either testing a child’s creative thought process or just flat out wrong.

Today’s stop on the journey was pickling peppers! I was quite confounded by this P-word, but thought it would be beneficial to investigate. My husband absolutely loves all kinds of chiles. A friend told me last week she bought 25 lbs of New Mexico Hatch chiles. We like spicy at our house, but a pound of chiles seems like enough for us for a week. I offered to take some off her hands, and picked them up today (we got 5lbs, which may or may not be a peck).

I stared at my five pounds of chiles, calculating strategic ways to use them:

We grilled several at lunch and I discovered I cannot eat them because they are so spicy! So it is up to my husband to eat 5lbs of chiles.

Canning jalapeños has been on my radar in the past few days, so I decided, “why not can the hatch chiles instead?” It was a satisfying substitute. However, for me to can them, I had to learn what to do and get big mason jars. A lot of mason jars. Then, I realized that canned jalapeños are just pickled jalapeños and I don’t have to lock them in an airtight jar!

After my realization, I found a recipe and made these bad boys (below). It was so easy. It took about two minutes of effort. In addition, I estimate it cost me about $0.50 maybe to make (it was probably more like $0.25, actually, but I’m too lazy to count how many peppers are in 5lbs right now.), and the same quantity at the store costs about $2.00. I can’t remember the exact supermarket price, but it is significantly higher. I wish I would have known how easy this was several years ago when I married my husband. Since he consumes probably about 50 cans of jalapeños a year, I could have saved some major cash!

If it weren’t for his obsessive love of chiles, I probably would never care if I knew how to pickle jalapeños or not, but if you have a chile-addict like I do, this is worth doing!

This is where I got my recipe. I’m not sure if my husband will like the sugar, but I also didn’t know if it was necessary. I might be using a different recipe and/or experimenting in the future. 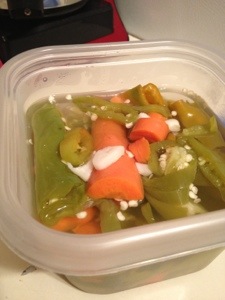